Be Their Voice Stop Human Trafficking! Speak Up! 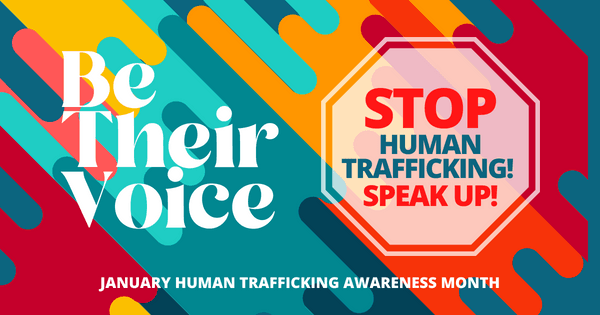 During the year of 2023, the Child Advocacy Center is sponsoring a year long campaign titled, “Be Their Voice.” Children who are victimized by child abuse in any form as well as sex human trafficking, need adults to advocate for them by “being their voice.” During the month of January, Human Trafficking Awareness Month, the theme will be “Be Their Voice: Stop Human Trafficking! Speak Up!”

January is known as National Human Trafficking Awareness Month since 2010. Since the beginning, the president has dedicated the month to bring awareness to the different forms of human trafficking, also known as human trafficking. The significance of January comes from the Emancipation Proclamation, which President Abraham Lincoln signed on January 1, 1883. In 1885, congress and the states ratified passed the 13th amendment declaring all slaves free. In recent years, the Trafficking Victims Protection Act (TVPA) of 2000, enshrined the United States commitment to combatting modern day slavery both, domestically and internationally.

Human trafficking is when individuals’ freedoms are stolen for another to gain a profit. Traffickers will use many different ways to traffic individuals from coercion, defraud, and physically force victims into selling sex.

The recruitment, harboring, transportation, provision, or obtaining of a person for the purpose of a commercial sex act where such an act is induced by force, fraud, coercion or in which the person induced to perform such act has not attained 18 years of age.

The recruitment, harboring, transportation, provision, or obtaining of a person for services, through the use of force, fraud, or coercion for the purpose of subjection to involuntary servitude, peonage, debt bondage, or slavery.”

Individuals being trafficked are people just like you and me. They are family members, friends, neighbors, etc. Individuals need to learn how to recognize the signs and how to report is suspected trafficking is taking place.

Signs to look for that can indicate human trafficking:

During January, The CAC in partnership with Methodist University Social Work Department, Fayetteville Alumnae Chapter of Delta Sigma Sorority, Inc., and WORTH Court (Human Trafficking court in Cumberland County) have partnered together to offer a variety of ways to learn more about human trafficking in our community and beyond. Please visit our website www.CACFayNC.org to learn more. There is also a page devoted to resources about human trafficking.

I encourage you to find ways to become educated about this issue and to advocate for those who have become victims to this terrible crime. January 11, 2023 is wear blue day in honor of victims of human trafficking. Please tag us in your post by using the following hashtags #cacafaync #worthcourt #betheirvoice